You can pledge for my Boneshaker Book Project “Mind is the Ride,” on Cycling and Philosophy, crowdfunding here. 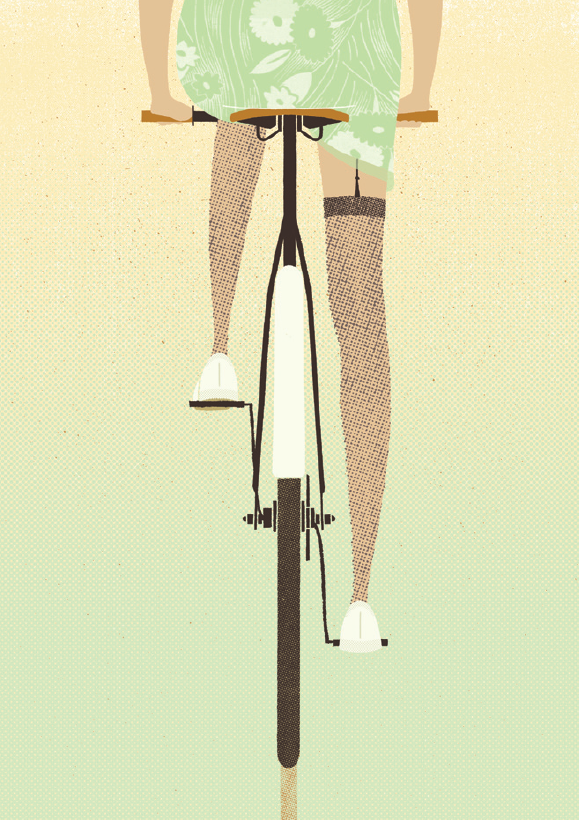 Last week I saw an old lady ride past wearing a black feather boa and leopard print leggings. There she went, at her own pace, in skin tight leggings and a boa. Now that, I thought, is cool.

The last woman in a boa I thought was that cool was Germaine Greer, author of The Female Eunuch, an iconic tract on woman’s liberation from 1970. Growing up in the eighties, The Female Eunuch passed me by. Like a lot of teenage boys I wasn’t sure what to make of my own ‘sex’, let alone anyone else’s.

One solution was to go on incredibly long bike rides on my Claude Butler racing bike. This didn’t solve any of the original dilemmas but at least it was an outlet for all that testosterone.

And it was then I came across a film of Germaine Greer in a black fur boa in battle with Norman Mailer, the chauvinist war horse of American Literature. Greer had an intellectual ferocity that tripped Norman Mailer and his dish-cloth politics back into the men’s room. Greer was hot, I decided. And she was right on. She didn’t burn bras, she twanged them.

Back in my eighties home town you either wore chinos, listened to Duran Duran and did the dance moves, or you dressed down for radical politics and street protest. Nowhere did the ambiguous flux of sexuality seem to fit in. I remember walking home at midnight with my racer after my first proper snog when a police car pulled over and asked me what I was doing. In those days it seemed like snogging and cycling, or even walking and not cycling, were illegal.

I found solace in the writing of Philip Larkin and then Jeannette Winterson and finally, girls on bikes.

Philip Larkin is one of the moles of English poetry. He is not known for his feminism and he publicly spouted right-wing rhetoric. But he had a libertarian chant in his tightly sprung couplets.

To hell with stereotypes, tiny-minded values, holding teacups with your fingertips, provincial curtains, dust on the mantelpiece, pulling over boys with bikes for having a snog: everything, perhaps, Larkin felt imprisoned by.

“Everyone old has dreamed of all their lives

Bonds and gestures pushed to one side

And everyone young going down the long slide…”

Unfortunately, the UK government had other ideas and embarked on a monolithic campaign about AIDS, just as Larkin was persuading me to go a-roving. Scooby Doo tombstones landed in heaps of dust between the ten o’clock news and the National Anthem. It was as if ‘AIDS’ had been unleashed with four capital letters solely to do battle with those four more profane letters on the walls of the youth club toilet. I desperately wanted to go “down the long slide”, but not into a tombstone.

At University I cycled everywhere. To the feminist poetry think-tanks and to the union bars full of sweat and Brylcreem, but the condom machine was always broken.

She pointed out that sex is as necessary as breathing. It is part of the fluid curve of life and nature. Entwine with nature, she said, give way to the sensuous curve, the flow of sex, the unboundaried thrill. Winterson said sex is a smeared rainbow; it is a delicious elusive ride. Hop on, she said, see where it takes you.

My girlfriend at university had a three-speed Raleigh. She was pretty easy to catch up with but I didn’t dare draw alongside ’til the pedestrian crossing. She hopped off to cross the road and I skipped off to follow and we talked and then we walked and then we rode side by side. I remember she had two dried autumnal leaves above her bed, curled around each other.

To my second girlfriend I gave a backie on a silver BMX down the steepest hill in the city. We were both drunk and the brakes didn’t work and we burnt our shoes out but it felt amazing, like “everyone young going down the long slide.” I remember when she danced to R ‘n’ B she would smack her bum in time to the offbeat. For some reason that always made me think of the silver BMX carousing down the hill.

My current girlfriend and I began our first date on a bike path, side by side, freewheeling into town, chatting shyly as the bearings purred within our wheels. Later we would cycle to India and back, returning down that same bike path, freewheeling home.

As I write, the sun has emerged from the English winter. You can feel the heat off the leaves, shrugging off the frost. And the streets are full of “Girls on Bikes”. It’s not only that “Boys on Bikes” don’t do it for me but that so many dress so badly, all grimacing and lycra, like bad S&M at a pool party. And while there are also girls in lycra there are so many more in ripped jeans, pullovers, tank tops, skirts and t-shirts. I cannot help but respond to their electric zap. As spring wakes up the earth so it wakes up the limbs. And those limbs travel the circle of the seasons so sexily on a bike. For sexuality itself is such a joyous ambiguity in motion.

In northern Europe we save our private bodies for the indoors, the fickle winter polices our flesh. But when the sun finally arrives, the hop from indoors to the bike is small, and we allow a more intimate self out in the open. The car does not do this; the car is a room on wheels. The bodiless driver speeds about in four walls and sexual signals are saved for winks in traffic jams. The car can only punish hips and legs, it can only fold them up, make them fearful behind steering column and air bag and hazard light. The car itself is sex. It coughs and burps and beeps like a pimp at a whorehouse. It will not lay itself gently against your hip as you unswing your leg at the end of the unwinding road.

A ‘ride’ has long been a crude metaphor for sex, a lumpen parallel of cycles and humping. “I bet he/she is a good ride”. But the reality of a more intimate sex is that we ride each other, an ecstatic escape from gravity, revolving around the heart of ourselves, tumbling into freedom with “everyone young going down the long slide,” on BMXs or granny gears or tandems.

‘Daisy Bell’ is one of the most famous songs ever written about bikes.

“ Daisy, Daisy, give me your answer, do,

I’m half crazy all for the love of you.

It won’t be a stylish marriage –

I can’t afford a carriage,

But you’d look sweet upon the seat

Of a bicycle built for two.”

It suggests abandon but also the binds of marriage and etiquette. Too often we forget its later lines….

“When the road’s dark, we can both despise

Policemen and lamps as well…”

Bikes were there at the start of the nineteenth century. The biggest spoon in the gene pool this side of ballroom dancing. Often the only way to get a roll in the long grass was a ride out of town on a ‘safety bicycle’. The ‘bloomers’ of women cyclists were the proto trousers of the suffragettes. No wonder cigar-smoking gents were set against them. “We wear the trousers around here, love.”

Half a century later ‘IBM 7094’ became the first computer to sing. And the song it sang was ‘Daisy Bell’. Buried in its binary switches, left and right, good and bad, in its stringent huddle of men with clipboards, I like to think there was a wayward sexuality. A rising sap in the machine. A pulse in the leg. A hot breeze on the mouth. A snog with your eyes closed as the wheels go round and round and round.

When my girlfriend read this article she said it could as well be called ‘Boys on Bikes’ so easily could its themes be applied to both sexes. OK, I said, but bikes are more feminine, their curves echoing the womanly form (as Dennis Gould put it in a previous Boneshaker ‘Oh the JOYS-Goddess/Two Wheeled Gypsy Queen’.) No, my girlfriend said, bikes are like boys and girls, angular and rounded. Bikes, she said, are bi.

In a world without limits, without brakes, without policemen, without stop signs, the rules fall away to a sensuous unknown.

“Rather than words comes the thought of high windows:

And beyond it, the deep blue air, that shows

Nothing, and is nowhere, and is endless.”

You can pledge for my Boneshaker Book Project “Mind is the Ride,” on Cycling and Philosophy, crowdfunding here.